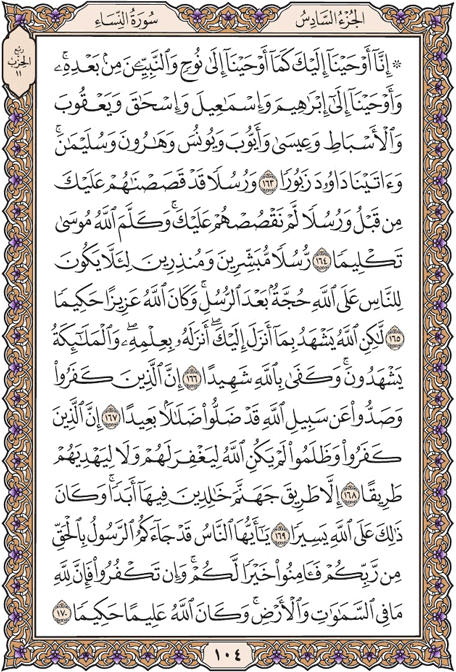 Indeed, We have revealed to you, [O Muúammad], as We revealed to Noah and the prophets after him. And we revealed to Abraham, Ishmael, Isaac, Jacob, the Descendants, Jesus, Job, Jonah, Aaron, and Solomon, and to David We gave the book [of Psalms].

[We sent] messengers as bringers of good tidings and warners so that mankind will have no argument against Allah after the messengers. And ever is Allah Exalted in Might and Wise.

But Allah bears witness to that which He has revealed to you. He has sent it down with His knowledge, and the angels bear witness [as well]. And sufficient is Allah as Witness.

Indeed, those who disbelieve and avert [people] from the way of Allah have certainly gone far astray.

Indeed, those who disbelieve and commit wrong [or injustice] - never will Allah forgive them, nor will He guide them to a path.

Except the path of Hell; they will abide therein forever. And that, for Allah , is [always] easy.

O Mankind, the Messenger has come to you with the truth from your Lord, so believe; it is better for you. But if you disbelieve - then indeed, to Allah belongs whatever is in the heavens and earth. And ever is Allah Knowing and Wise.