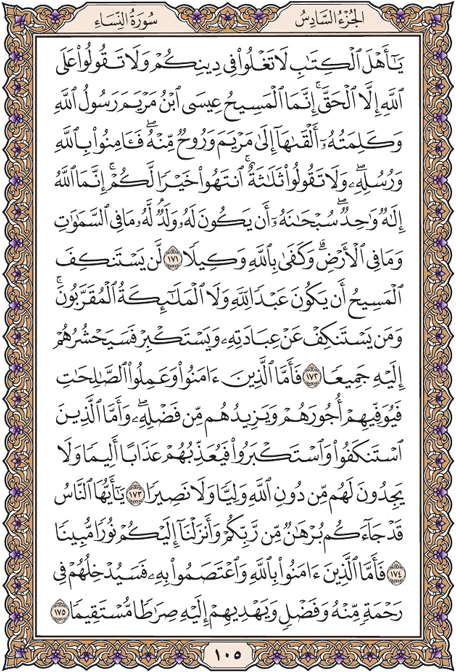 O People of the Scripture, do not commit excess in your religion or say about Allah except the truth. The Messiah, Jesus, the son of Mary, was but a messenger of Allah and His word which He directed to Mary and a soul [created at a command] from Him. So believe in Allah and His messengers. And do not say, |Three|; desist - it is better for you. Indeed, Allah is but one God. Exalted is He above having a son. To Him belongs whatever is in the heavens and whatever is on the earth. And sufficient is Allah as Disposer of affairs.

Never would the Messiah disdain to be a servant of Allah , nor would the angels near [to Him]. And whoever disdains His worship and is arrogant - He will gather them to Himself all together.

And as for those who believed and did righteous deeds, He will give them in full their rewards and grant them extra from His bounty. But as for those who disdained and were arrogant, He will punish them with a painful punishment, and they will not find for themselves besides Allah any protector or helper.

O mankind, there has come to you a conclusive proof from your Lord, and We have sent down to you a clear light.

So those who believe in Allah and hold fast to Him - He will admit them to mercy from Himself and bounty and guide them to Himself on a straight path.