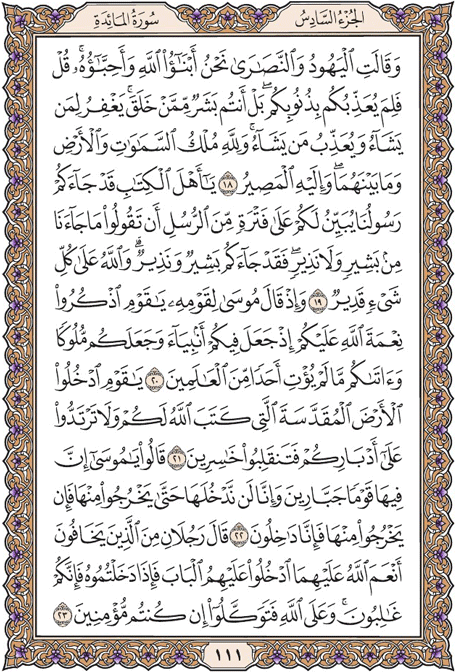 But the Jews and the Christians say, |We are the children of Allah and His beloved.| Say, |Then why does He punish you for your sins?| Rather, you are human beings from among those He has created. He forgives whom He wills, and He punishes whom He wills. And to Allah belongs the dominion of the heavens and the earth and whatever is between them, and to Him is the [final] destination.

And [mention, O Muúammad], when Moses said to his people, |O my people, remember the favor of Allah upon you when He appointed among you prophets and made you possessors and gave you that which He had not given anyone among the worlds.

O my people, enter the Holy Land which Allah has assigned to you and do not turn back [from fighting in Allah 's cause] and [thus] become losers.

They said, |O Moses, indeed within it is a people of tyrannical strength, and indeed, we will never enter it until they leave it; but if they leave it, then we will enter.

Said two men from those who feared [to disobey] upon whom Allah had bestowed favor, |Enter upon them through the gate, for when you have entered it, you will be predominant. And upon Allah rely, if you should be believers.