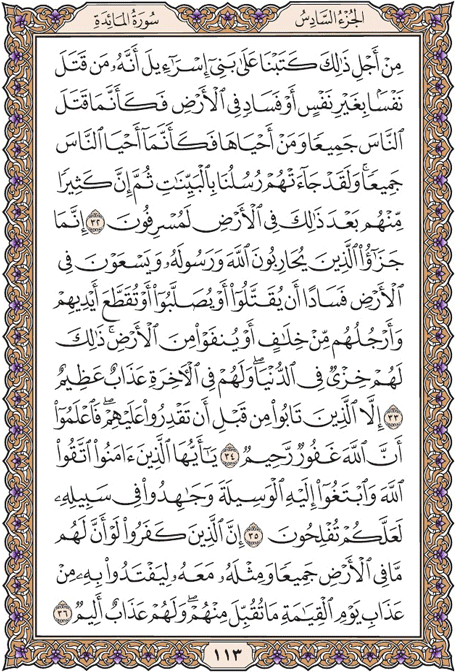 Because of that, We decreed upon the Children of Israel that whoever kills a soul unless for a soul or for corruption [done] in the land - it is as if he had slain mankind entirely. And whoever saves one - it is as if he had saved mankind entirely. And our messengers had certainly come to them with clear proofs. Then indeed many of them, [even] after that, throughout the land, were transgressors.

Indeed, the penalty for those who wage war against Allah and His Messenger and strive upon earth [to cause] corruption is none but that they be killed or crucified or that their hands and feet be cut off from opposite sides or that they be exiled from the land. That is for them a disgrace in this world; and for them in the Hereafter is a great punishment,

Except for those who return [repenting] before you apprehend them. And know that Allah is Forgiving and Merciful.

O you who have believed, fear Allah and seek the means [of nearness] to Him and strive in His cause that you may succeed.

Indeed, those who disbelieve - if they should have all that is in the earth and the like of it with it by which to ransom themselves from the punishment of the Day of Resurrection, it will not be accepted from them, and for them is a painful punishment