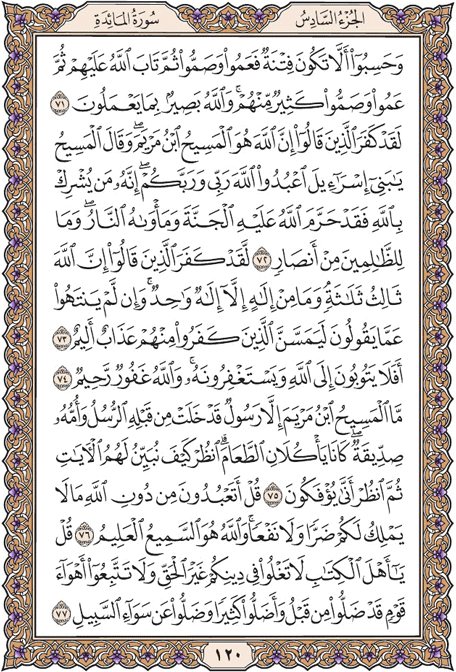 They have certainly disbelieved who say, | Allah is the Messiah, the son of Mary| while the Messiah has said, |O Children of Israel, worship Allah , my Lord and your Lord.| Indeed, he who associates others with Allah - Allah has forbidden him Paradise, and his refuge is the Fire. And there are not for the wrongdoers any helpers.

They have certainly disbelieved who say, | Allah is the third of three.| And there is no god except one God. And if they do not desist from what they are saying, there will surely afflict the disbelievers among them a painful punishment.

So will they not repent to Allah and seek His forgiveness? And Allah is Forgiving and Merciful.

The Messiah, son of Mary, was not but a messenger; [other] messengers have passed on before him. And his mother was a supporter of truth. They both used to eat food. Look how We make clear to them the signs; then look how they are deluded.

Say, |Do you worship besides Allah that which holds for you no [power of] harm or benefit while it is Allah who is the Hearing, the Knowing?|

Say, |O People of the Scripture, do not exceed limits in your religion beyond the truth and do not follow the inclinations of a people who had gone astray before and misled many and have strayed from the soundness of the way.