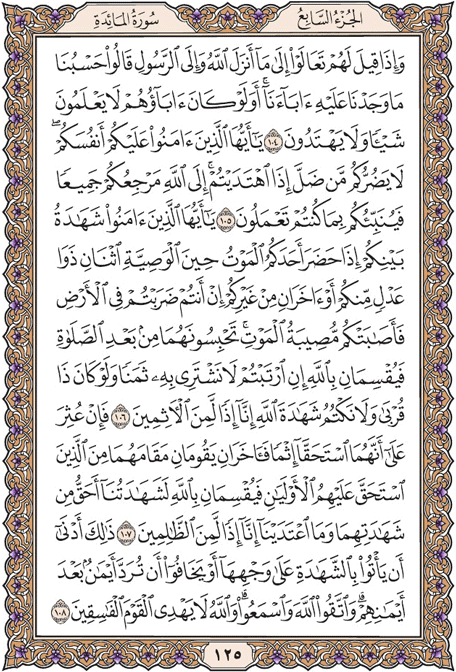 And when it is said to them, |Come to what Allah has revealed and to the Messenger,| they say, |Sufficient for us is that upon which we found our fathers.| Even though their fathers knew nothing, nor were they guided?

O you who have believed, upon you is [responsibility for] yourselves. Those who have gone astray will not harm you when you have been guided. To Allah is you return all together; then He will inform you of what you used to do.

O you who have believed, testimony [should be taken] among you when death approaches one of you at the time of bequest - [that of] two just men from among you or two others from outside if you are traveling through the land and the disaster of death should strike you. Detain them after the prayer and let them both swear by Allah if you doubt [their testimony, saying], |We will not exchange our oath for a price, even if he should be a near relative, and we will not withhold the testimony of Allah . Indeed, we would then be of the sinful.

But if it is found that those two were guilty of perjury, let two others stand in their place [who are] foremost [in claim] from those who have a lawful right. And let them swear by Allah , |Our testimony is truer than their testimony, and we have not transgressed. Indeed, we would then be of the wrongdoers.

That is more likely that they will give testimony according to its [true] objective, or [at least] they would fear that [other] oaths might be taken after their oaths. And fear Allah and listen; and Allah does not guide the defiantly disobedient people.