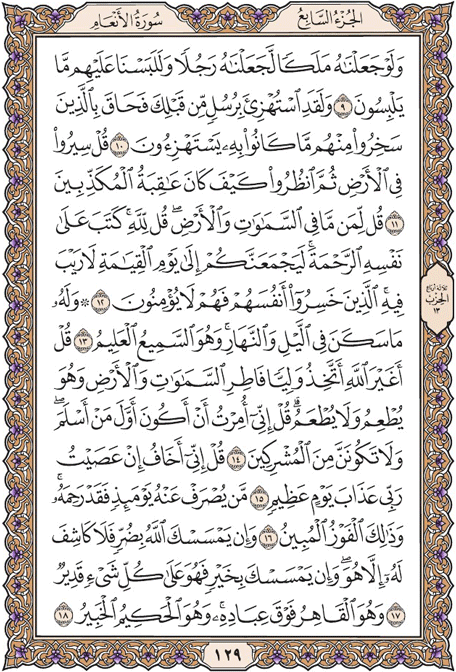 And already were messengers ridiculed before you, but those who mocked them were enveloped by that which they used to ridicule.

Say, |Travel through the land; then observe how was the end of the deniers.

Say, |To whom belongs whatever is in the heavens and earth?| Say, |To Allah .| He has decreed upon Himself mercy. He will surely assemble you for the Day of Resurrection, about which there is no doubt. Those who will lose themselves [that Day] do not believe.

And to Him belongs that which reposes by night and by day, and He is the Hearing, the Knowing.

Say, |Is it other than Allah I should take as a protector, Creator of the heavens and the earth, while it is He who feeds and is not fed?| Say, [O Muúammad], |Indeed, I have been commanded to be the first [among you] who submit [to Allah ] and [was commanded], 'Do not ever be of the polytheists.' |

Say, |Indeed I fear, if I should disobey my Lord, the punishment of a tremendous Day.

He from whom it is averted that Day - [ Allah ] has granted him mercy. And that is the clear attainment.

And if Allah should touch you with adversity, there is no remover of it except Him. And if He touches you with good - then He is over all things competent.