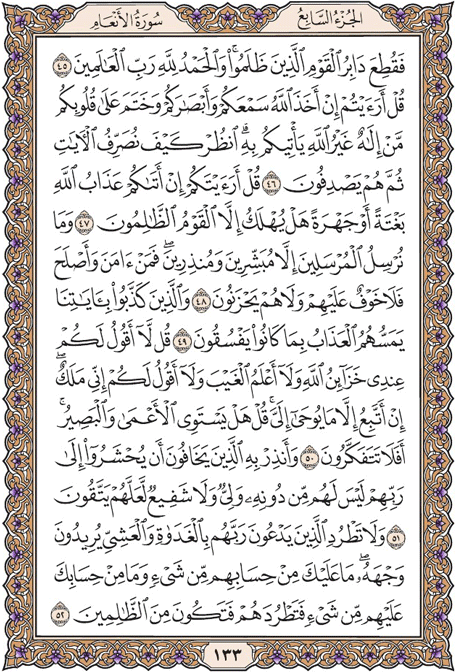 So the people that committed wrong were eliminated. And praise to Allah , Lord of the worlds.

Say, |Have you considered: if Allah should take away your hearing and your sight and set a seal upon your hearts, which deity other than Allah could bring them [back] to you?| Look how we diversify the verses; then they [still] turn away.

Say, |Have you considered: if the punishment of Allah should come to you unexpectedly or manifestly, will any be destroyed but the wrongdoing people?|

And We send not the messengers except as bringers of good tidings and warners. So whoever believes and reforms - there will be no fear concerning them, nor will they grieve.

But those who deny Our verses - the punishment will touch them for their defiant disobedience.

Say, [O Muúammad], |I do not tell you that I have the depositories [containing the provision] of Allah or that I know the unseen, nor do I tell you that I am an angel. I only follow what is revealed to me.| Say, |Is the blind equivalent to the seeing? Then will you not give thought?|

And warn by the Qur'an those who fear that they will be gathered before their Lord - for them besides Him will be no protector and no intercessor - that they might become righteous.

And do not send away those who call upon their Lord morning and afternoon, seeking His countenance. Not upon you is anything of their account and not upon them is anything of your account. So were you to send them away, you would [then] be of the wrongdoers.