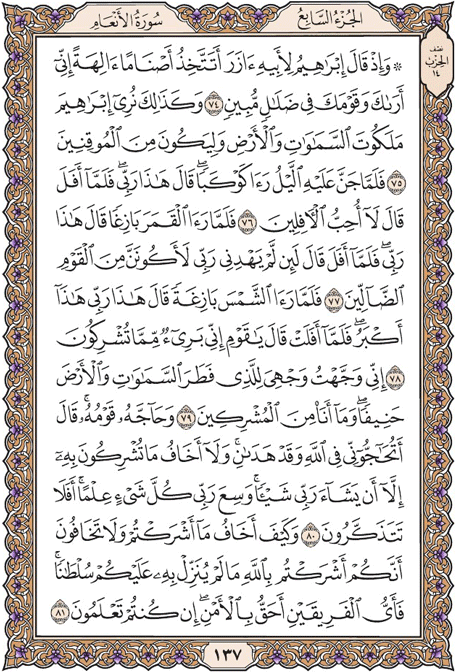 And [mention, O Muúammad], when Abraham said to his father Azar, |Do you take idols as deities? Indeed, I see you and your people to be in manifest error.

So when the night covered him [with darkness], he saw a star. He said, |This is my lord.| But when it set, he said, |I like not those that disappear.

And when he saw the moon rising, he said, |This is my lord.| But when it set, he said, |Unless my Lord guides me, I will surely be among the people gone astray.

And when he saw the sun rising, he said, |This is my lord; this is greater.| But when it set, he said, |O my people, indeed I am free from what you associate with Allah .

Indeed, I have turned my face toward He who created the heavens and the earth, inclining toward truth, and I am not of those who associate others with Allah .

And his people argued with him. He said, |Do you argue with me concerning Allah while He has guided me? And I fear not what you associate with Him [and will not be harmed] unless my Lord should will something. My Lord encompasses all things in knowledge; then will you not remember?

And how should I fear what you associate while you do not fear that you have associated with Allah that for which He has not sent down to you any authority? So which of the two parties has more right to security, if you should know?