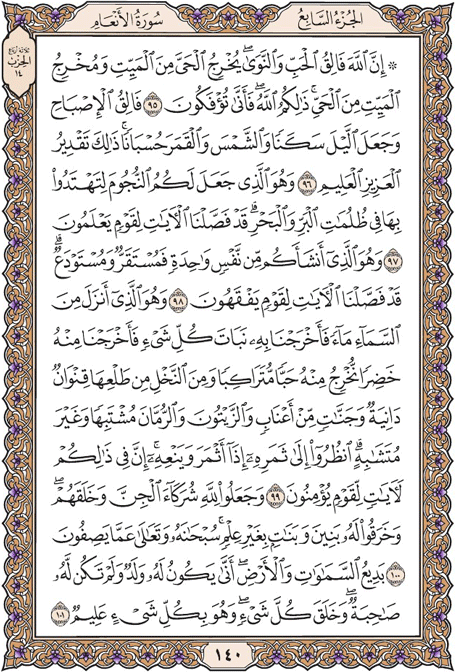 [He is] the cleaver of daybreak and has made the night for rest and the sun and moon for calculation. That is the determination of the Exalted in Might, the Knowing.

And it is He who placed for you the stars that you may be guided by them through the darknesses of the land and sea. We have detailed the signs for a people who know.

And it is He who produced you from one soul and [gave you] a place of dwelling and of storage. We have detailed the signs for a people who understand.

And it is He who sends down rain from the sky, and We produce thereby the growth of all things. We produce from it greenery from which We produce grains arranged in layers. And from the palm trees - of its emerging fruit are clusters hanging low. And [We produce] gardens of grapevines and olives and pomegranates, similar yet varied. Look at [each of] its fruit when it yields and [at] its ripening. Indeed in that are signs for a people who believe.

But they have attributed to Allah partners - the jinn, while He has created them - and have fabricated for Him sons and daughters. Exalted is He and high above what they describe

[He is] Originator of the heavens and the earth. How could He have a son when He does not have a companion and He created all things? And He is, of all things, Knowing.