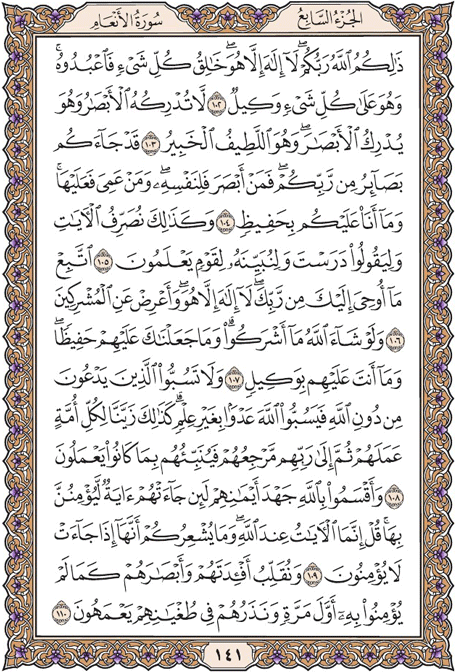 That is Allah , your Lord; there is no deity except Him, the Creator of all things, so worship Him. And He is Disposer of all things.

Vision perceives Him not, but He perceives [all] vision; and He is the Subtle, the Acquainted.

There has come to you enlightenment from your Lord. So whoever will see does so for [the benefit of] his soul, and whoever is blind [does harm] against it. And [say], |I am not a guardian over you.

And thus do We diversify the verses so the disbelievers will say, |You have studied,| and so We may make the Qur'an clear for a people who know.

Follow, [O Muúammad], what has been revealed to you from your Lord - there is no deity except Him - and turn away from those who associate others with Allah .

But if Allah had willed, they would not have associated. And We have not appointed you over them as a guardian, nor are you a manager over them.

And do not insult those they invoke other than Allah , lest they insult Allah in enmity without knowledge. Thus We have made pleasing to every community their deeds. Then to their Lord is their return, and He will inform them about what they used to do.

And they swear by Allah their strongest oaths that if a sign came to them, they would surely believe in it. Say, |The signs are only with Allah .| And what will make you perceive that even if a sign came, they would not believe.

And We will turn away their hearts and their eyes just as they refused to believe in it the first time. And We will leave them in their transgression, wandering blindly.