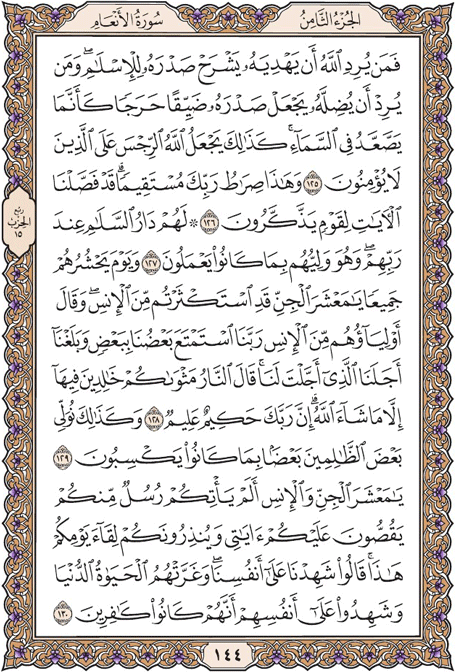 So whoever Allah wants to guide - He expands his breast to [contain] Islam; and whoever He wants to misguide - He makes his breast tight and constricted as though he were climbing into the sky. Thus does Allah place defilement upon those who do not believe.

And this is the path of your Lord, [leading] straight. We have detailed the verses for a people who remember.

For them will be the Home of Peace with their Lord. And He will be their protecting friend because of what they used to do.

And [mention, O Muúammad], the Day when He will gather them together [and say], |O company of jinn, you have [misled] many of mankind.| And their allies among mankind will say, |Our Lord, some of us made use of others, and we have [now] reached our term, which you appointed for us.| He will say, |The Fire is your residence, wherein you will abide eternally, except for what Allah wills. Indeed, your Lord is Wise and Knowing.

And thus will We make some of the wrongdoers allies of others for what they used to earn.

|O company of jinn and mankind, did there not come to you messengers from among you, relating to you My verses and warning you of the meeting of this Day of yours?| They will say, |We bear witness against ourselves|; and the worldly life had deluded them, and they will bear witness against themselves that they were disbelievers.