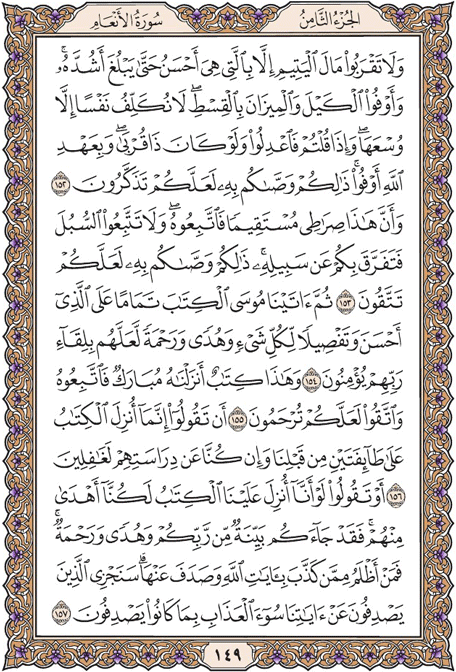 And do not approach the orphan's property except in a way that is best until he reaches maturity. And give full measure and weight in justice. We do not charge any soul except [with that within] its capacity. And when you testify, be just, even if [it concerns] a near relative. And the covenant of Allah fulfill. This has He instructed you that you may remember.

And, [moreover], this is My path, which is straight, so follow it; and do not follow [other] ways, for you will be separated from His way. This has He instructed you that you may become righteous.

Then We gave Moses the Scripture, making complete [Our favor] upon the one who did good and as a detailed explanation of all things and as guidance and mercy that perhaps in [the matter of] the meeting with their Lord they would believe.

And this [Qur'an] is a Book We have revealed [which is] blessed, so follow it and fear Allah that you may receive mercy.

[We revealed it] lest you say, |The Scripture was only sent down to two groups before us, but we were of their study unaware,|

Or lest you say, |If only the Scripture had been revealed to us, we would have been better guided than they.| So there has [now] come to you a clear evidence from your Lord and a guidance and mercy. Then who is more unjust than one who denies the verses of Allah and turns away from them? We will recompense those who turn away from Our verses with the worst of punishment for their having turned away.