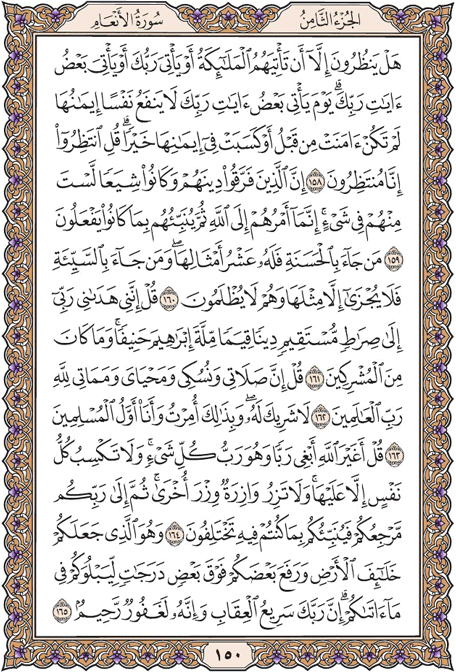 Indeed, those who have divided their religion and become sects - you, [O Muúammad], are not [associated] with them in anything. Their affair is only [left] to Allah ; then He will inform them about what they used to do.

Say, |Indeed, my Lord has guided me to a straight path - a correct religion - the way of Abraham, inclining toward truth. And he was not among those who associated others with Allah .

Say, |Indeed, my prayer, my rites of sacrifice, my living and my dying are for Allah , Lord of the worlds.

No partner has He. And this I have been commanded, and I am the first [among you] of the Muslims.

Say, |Is it other than Allah I should desire as a lord while He is the Lord of all things? And every soul earns not [blame] except against itself, and no bearer of burdens will bear the burden of another. Then to your Lord is your return, and He will inform you concerning that over which you used to differ.

And it is He who has made you successors upon the earth and has raised some of you above others in degrees [of rank] that He may try you through what He has given you. Indeed, your Lord is swift in penalty; but indeed, He is Forgiving and Merciful.