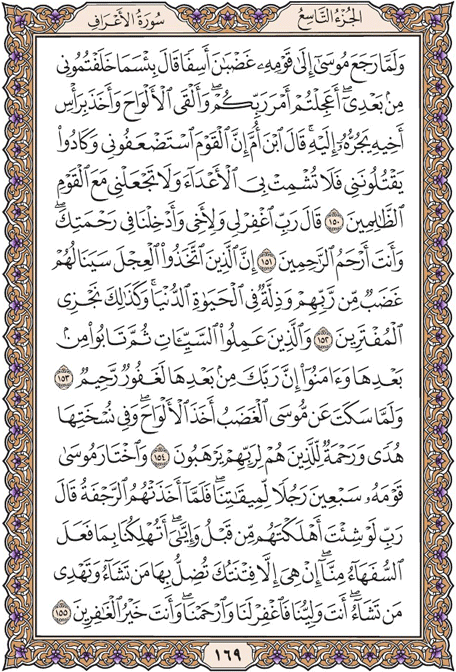 And when Moses returned to his people, angry and grieved, he said, |How wretched is that by which you have replaced me after [my departure]. Were you impatient over the matter of your Lord?| And he threw down the tablets and seized his brother by [the hair of] his head, pulling him toward him. [Aaron] said, |O son of my mother, indeed the people oppressed me and were about to kill me, so let not the enemies rejoice over me and do not place me among the wrongdoing people.

[Moses] said, |My Lord, forgive me and my brother and admit us into Your mercy, for You are the most merciful of the merciful.

Indeed, those who took the calf [for worship] will obtain anger from their Lord and humiliation in the life of this world, and thus do We recompense the inventors [of falsehood].

But those who committed misdeeds and then repented after them and believed - indeed your Lord, thereafter, is Forgiving and Merciful.

And when the anger subsided in Moses, he took up the tablets; and in their inscription was guidance and mercy for those who are fearful of their Lord.

And Moses chose from his people seventy men for Our appointment. And when the earthquake seized them, he said, |My Lord, if You had willed, You could have destroyed them before and me [as well]. Would You destroy us for what the foolish among us have done? This is not but Your trial by which You send astray whom You will and guide whom You will. You are our Protector, so forgive us and have mercy upon us; and You are the best of forgivers.