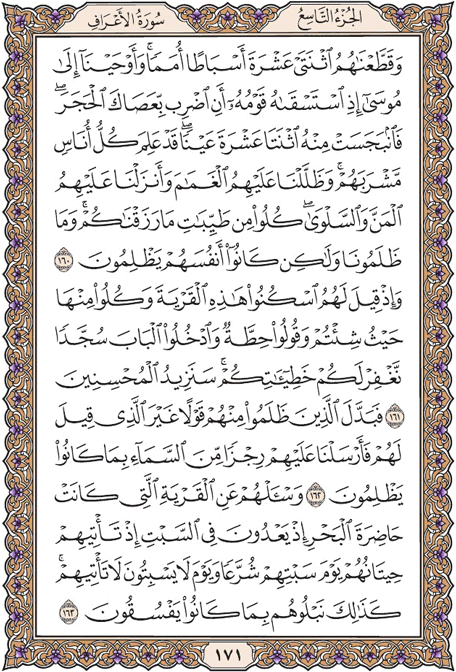 And We divided them into twelve descendant tribes [as distinct] nations. And We inspired to Moses when his people implored him for water, |Strike with your staff the stone,| and there gushed forth from it twelve springs. Every people knew its watering place. And We shaded them with clouds and sent down upon them manna and quails, [saying], |Eat from the good things with which We have provided you.| And they wronged Us not, but they were [only] wronging themselves.

And [mention, O Muúammad], when it was said to them, |Dwell in this city and eat from it wherever you will and say, 'Relieve us of our burdens,' and enter the gate bowing humbly; We will [then] forgive you your sins. We will increase the doers of good [in goodness and reward].

But those who wronged among them changed [the words] to a statement other than that which had been said to them. So We sent upon them a punishment from the sky for the wrong that they were doing.

And ask them about the town that was by the sea - when they transgressed in [the matter of] the sabbath - when their fish came to them openly on their sabbath day, and the day they had no sabbath they did not come to them. Thus did We give them trial because they were defiantly disobedient.