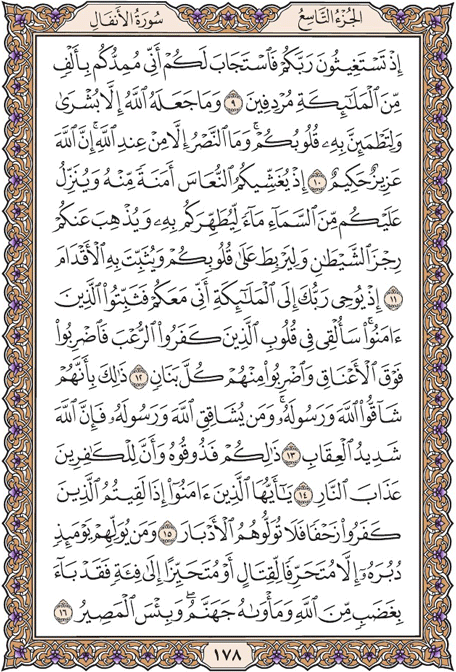 [Remember] when you asked help of your Lord, and He answered you, |Indeed, I will reinforce you with a thousand from the angels, following one another.

And Allah made it not but good tidings and so that your hearts would be assured thereby. And victory is not but from Allah . Indeed, Allah is Exalted in Might and Wise.

[Remember] when He overwhelmed you with drowsiness [giving] security from Him and sent down upon you from the sky, rain by which to purify you and remove from you the evil [suggestions] of Satan and to make steadfast your hearts and plant firmly thereby your feet.

[Remember] when your Lord inspired to the angels, |I am with you, so strengthen those who have believed. I will cast terror into the hearts of those who disbelieved, so strike [them] upon the necks and strike from them every fingertip.

|That [is yours], so taste it.| And indeed for the disbelievers is the punishment of the Fire.

O you who have believed, when you meet those who disbelieve advancing [for battle], do not turn to them your backs [in flight].

And whoever turns his back to them on such a day, unless swerving [as a strategy] for war or joining [another] company, has certainly returned with anger [upon him] from Allah , and his refuge is Hell - and wretched is the destination.