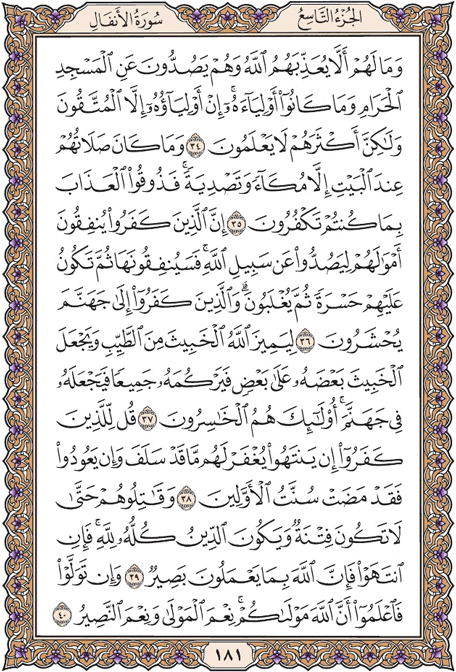 But why should Allah not punish them while they obstruct [people] from al-Masjid al- îaram and they were not [fit to be] its guardians? Its [true] guardians are not but the righteous, but most of them do not know.

And their prayer at the House was not except whistling and handclapping. So taste the punishment for what you disbelieved.

Indeed, those who disbelieve spend their wealth to avert [people] from the way of Allah . So they will spend it; then it will be for them a [source of] regret; then they will be overcome. And those who have disbelieved - unto Hell they will be gathered.

[This is] so that Allah may distinguish the wicked from the good and place the wicked some of them upon others and heap them all together and put them into Hell. It is those who are the losers.

Say to those who have disbelieved [that] if they cease, what has previously occurred will be forgiven for them. But if they return [to hostility] - then the precedent of the former [rebellious] peoples has already taken place.

And fight them until there is no fitnah and [until] the religion, all of it, is for Allah . And if they cease - then indeed, Allah is Seeing of what they do.