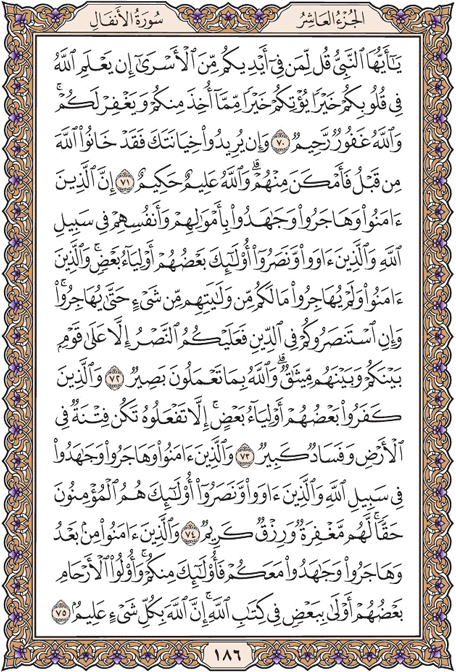 O Prophet, say to whoever is in your hands of the captives, |If Allah knows [any] good in your hearts, He will give you [something] better than what was taken from you, and He will forgive you; and Allah is Forgiving and Merciful.

But if they intend to betray you - then they have already betrayed Allah before, and He empowered [you] over them. And Allah is Knowing and Wise.

Indeed, those who have believed and emigrated and fought with their wealth and lives in the cause of Allah and those who gave shelter and aided - they are allies of one another. But those who believed and did not emigrate - for you there is no guardianship of them until they emigrate. And if they seek help of you for the religion, then you must help, except against a people between yourselves and whom is a treaty. And Allah is Seeing of what you do.

And those who disbelieved are allies of one another. If you do not do so, there will be fitnah on earth and great corruption.

But those who have believed and emigrated and fought in the cause of Allah and those who gave shelter and aided - it is they who are the believers, truly. For them is forgiveness and noble provision.

And those who believed after [the initial emigration] and emigrated and fought with you - they are of you. But those of [blood] relationship are more entitled [to inheritance] in the decree of Allah . Indeed, Allah is Knowing of all things.