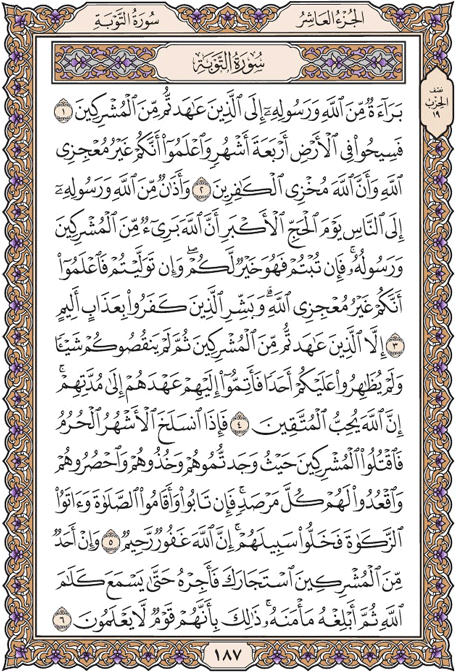 [This is a declaration of] disassociation, from Allah and His Messenger, to those with whom you had made a treaty among the polytheists.

So travel freely, [O disbelievers], throughout the land [during] four months but know that you cannot cause failure to Allah and that Allah will disgrace the disbelievers.

And [it is] an announcement from Allah and His Messenger to the people on the day of the greater pilgrimage that Allah is disassociated from the disbelievers, and [so is] His Messenger. So if you repent, that is best for you; but if you turn away - then know that you will not cause failure to Allah . And give tidings to those who disbelieve of a painful punishment.

Excepted are those with whom you made a treaty among the polytheists and then they have not been deficient toward you in anything or supported anyone against you; so complete for them their treaty until their term [has ended]. Indeed, Allah loves the righteous [who fear Him].

And when the sacred months have passed, then kill the polytheists wherever you find them and capture them and besiege them and sit in wait for them at every place of ambush. But if they should repent, establish prayer, and give zakah, let them [go] on their way. Indeed, Allah is Forgiving and Merciful.

And if any one of the polytheists seeks your protection, then grant him protection so that he may hear the words of Allah . Then deliver him to his place of safety. That is because they are a people who do not know.