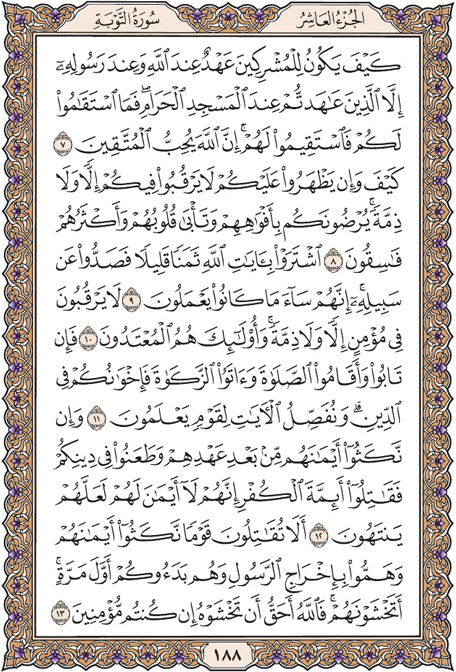 How can there be for the polytheists a treaty in the sight of Allah and with His Messenger, except for those with whom you made a treaty at al-Masjid al-îaram? So as long as they are upright toward you, be upright toward them. Indeed, Allah loves the righteous [who fear Him].

How [can there be a treaty] while, if they gain dominance over you, they do not observe concerning you any pact of kinship or covenant of protection? They satisfy you with their mouths, but their hearts refuse [compliance], and most of them are defiantly disobedient.

They have exchanged the signs of Allah for a small price and averted [people] from His way. Indeed, it was evil that they were doing.

They do not observe toward a believer any pact of kinship or covenant of protection. And it is they who are the transgressors.

But if they repent, establish prayer, and give zakah, then they are your brothers in religion; and We detail the verses for a people who know.

And if they break their oaths after their treaty and defame your religion, then fight the leaders of disbelief, for indeed, there are no oaths [sacred] to them; [fight them that] they might cease.

Would you not fight a people who broke their oaths and determined to expel the Messenger, and they had begun [the attack upon] you the first time? Do you fear them? But Allah has more right that you should fear Him, if you are [truly] believers.