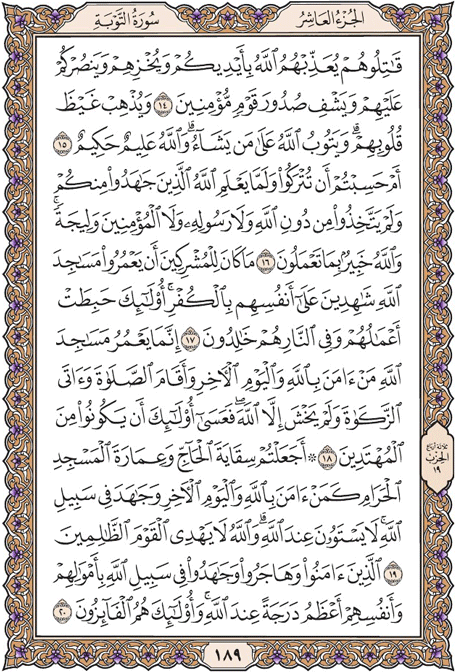 Fight them; Allah will punish them by your hands and will disgrace them and give you victory over them and satisfy the breasts of a believing people

And remove the fury in the believers' hearts. And Allah turns in forgiveness to whom He wills; and Allah is Knowing and Wise.

Do you think that you will be left [as you are] while Allah has not yet made evident those among you who strive [for His cause] and do not take other than Allah , His Messenger and the believers as intimates? And Allah is Acquainted with what you do.

It is not for the polytheists to maintain the mosques of Allah [while] witnessing against themselves with disbelief. [For] those, their deeds have become worthless, and in the Fire they will abide eternally.

The mosques of Allah are only to be maintained by those who believe in Allah and the Last Day and establish prayer and give zakah and do not fear except Allah , for it is expected that those will be of the [rightly] guided.

Have you made the providing of water for the pilgrim and the maintenance of al-Masjid al-îaram equal to [the deeds of] one who believes in Allah and the Last Day and strives in the cause of Allah ? They are not equal in the sight of Allah . And Allah does not guide the wrongdoing people.

The ones who have believed, emigrated and striven in the cause of Allah with their wealth and their lives are greater in rank in the sight of Allah . And it is those who are the attainers [of success].