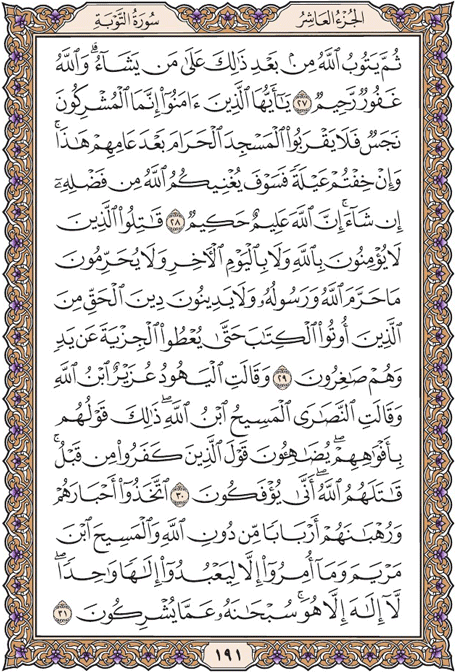 Then Allah will accept repentance after that for whom He wills; and Allah is Forgiving and Merciful.

O you who have believed, indeed the polytheists are unclean, so let them not approach al-Masjid al-îaram after this, their [final] year. And if you fear privation, Allah will enrich you from His bounty if He wills. Indeed, Allah is Knowing and Wise.

Fight those who do not believe in Allah or in the Last Day and who do not consider unlawful what Allah and His Messenger have made unlawful and who do not adopt the religion of truth from those who were given the Scripture - [fight] until they give the jizyah willingly while they are humbled.

The Jews say, |Ezra is the son of Allah |; and the Christians say, |The Messiah is the son of Allah .| That is their statement from their mouths; they imitate the saying of those who disbelieved [before them]. May Allah destroy them; how are they deluded?

They have taken their scholars and monks as lords besides Allah , and [also] the Messiah, the son of Mary. And they were not commanded except to worship one God; there is no deity except Him. Exalted is He above whatever they associate with Him.