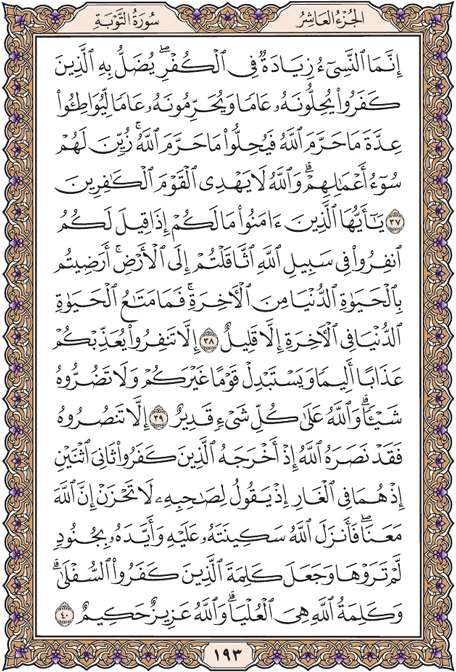 Indeed, the postponing [of restriction within sacred months] is an increase in disbelief by which those who have disbelieved are led [further] astray. They make it lawful one year and unlawful another year to correspond to the number made unlawful by Allah and [thus] make lawful what Allah has made unlawful. Made pleasing to them is the evil of their deeds; and Allah does not guide the disbelieving people.

O you who have believed, what is [the matter] with you that, when you are told to go forth in the cause of Allah , you adhere heavily to the earth? Are you satisfied with the life of this world rather than the Hereafter? But what is the enjoyment of worldly life compared to the Hereafter except a [very] little.

If you do not go forth, He will punish you with a painful punishment and will replace you with another people, and you will not harm Him at all. And Allah is over all things competent.

If you do not aid the Prophet - Allah has already aided him when those who disbelieved had driven him out [of Makkah] as one of two, when they were in the cave and he said to his companion, |Do not grieve; indeed Allah is with us.| And Allah sent down his tranquillity upon him and supported him with angels you did not see and made the word of those who disbelieved the lowest, while the word of Allah - that is the highest. And Allah is Exalted in Might and Wise.