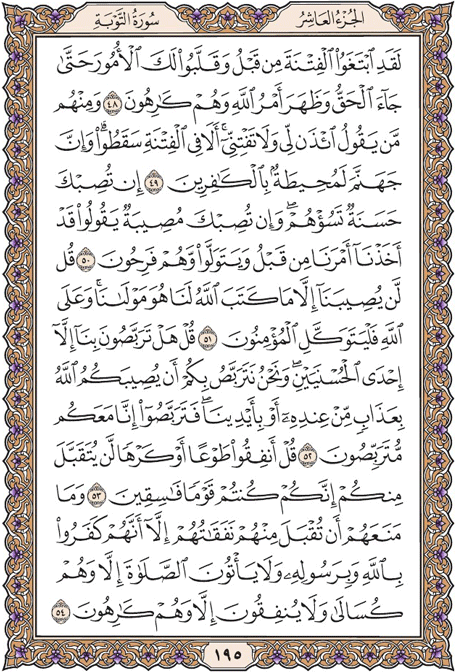 They had already desired dissension before and had upset matters for you until the truth came and the ordinance of Allah appeared, while they were averse.

And among them is he who says, |Permit me [to remain at home] and do not put me to trial.| Unquestionably, into trial they have fallen. And indeed, Hell will encompass the disbelievers.

If good befalls you, it distresses them; but if disaster strikes you, they say, |We took our matter [in hand] before,| and turn away while they are rejoicing.

Say, |Never will we be struck except by what Allah has decreed for us; He is our protector.| And upon Allah let the believers rely.

Say, |Do you await for us except one of the two best things while we await for you that Allah will afflict you with punishment from Himself or at our hands? So wait; indeed we, along with you, are waiting.

Say, |Spend willingly or unwillingly; never will it be accepted from you. Indeed, you have been a defiantly disobedient people.