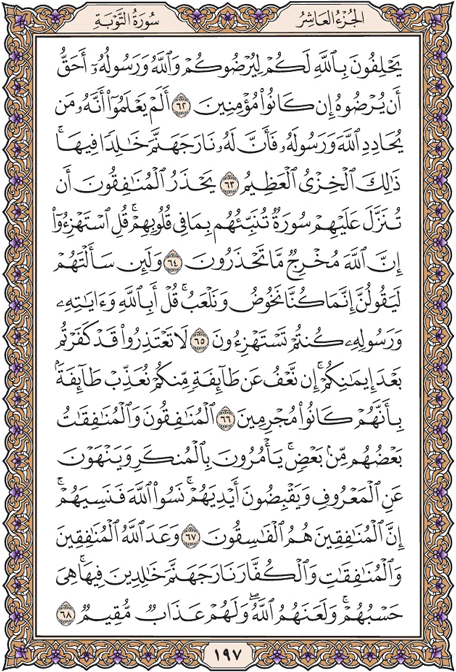 They swear by Allah to you [Muslims] to satisfy you. But Allah and His Messenger are more worthy for them to satisfy, if they should be believers.

Do they not know that whoever opposes Allah and His Messenger - that for him is the fire of Hell, wherein he will abide eternally? That is the great disgrace.

They hypocrites are apprehensive lest a surah be revealed about them, informing them of what is in their hearts. Say, |Mock [as you wish]; indeed, Allah will expose that which you fear.

And if you ask them, they will surely say, |We were only conversing and playing.| Say, |Is it Allah and His verses and His Messenger that you were mocking?|

Make no excuse; you have disbelieved after your belief. If We pardon one faction of you - We will punish another faction because they were criminals.

The hypocrite men and hypocrite women are of one another. They enjoin what is wrong and forbid what is right and close their hands. They have forgotten Allah , so He has forgotten them [accordingly]. Indeed, the hypocrites - it is they who are the defiantly disobedient.

Allah has promised the hypocrite men and hypocrite women and the disbelievers the fire of Hell, wherein they will abide eternally. It is sufficient for them. And Allah has cursed them, and for them is an enduring punishment.