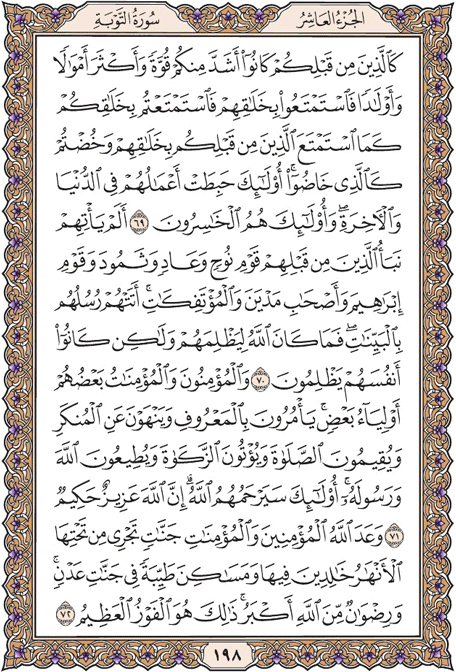 [You disbelievers are] like those before you; they were stronger than you in power and more abundant in wealth and children. They enjoyed their portion [of worldly enjoyment], and you have enjoyed your portion as those before you enjoyed their portion, and you have engaged [in vanities] like that in which they engaged. [It is] those whose deeds have become worthless in this world and in the Hereafter, and it is they who are the losers.

Has there not reached them the news of those before them - the people of Noah and [the tribes of] 'Aad and Thamud and the people of Abraham and the companions of Madyan and the towns overturned? Their messengers came to them with clear proofs. And Allah would never have wronged them, but they were wronging themselves.

The believing men and believing women are allies of one another. They enjoin what is right and forbid what is wrong and establish prayer and give zakah and obey Allah and His Messenger. Those - Allah will have mercy upon them. Indeed, Allah is Exalted in Might and Wise.

Allah has promised the believing men and believing women gardens beneath which rivers flow, wherein they abide eternally, and pleasant dwellings in gardens of perpetual residence; but approval from Allah is greater. It is that which is the great attainment.