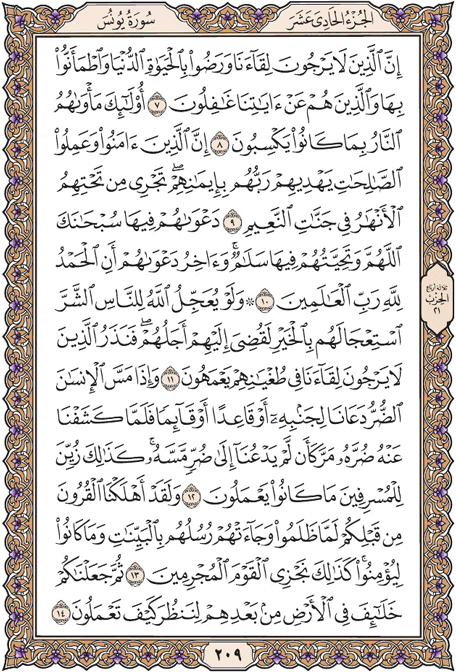 Indeed, those who do not expect the meeting with Us and are satisfied with the life of this world and feel secure therein and those who are heedless of Our signs

For those their refuge will be the Fire because of what they used to earn.

Indeed, those who have believed and done righteous deeds - their Lord will guide them because of their faith. Beneath them rivers will flow in the Gardens of Pleasure

And if Allah was to hasten for the people the evil [they invoke] as He hastens for them the good, their term would have been ended for them. But We leave the ones who do not expect the meeting with Us, in their transgression, wandering blindly

And when affliction touches man, he calls upon Us, whether lying on his side or sitting or standing; but when We remove from him his affliction, he continues [in disobedience] as if he had never called upon Us to [remove] an affliction that touched him. Thus is made pleasing to the transgressors that which they have been doing

And We had already destroyed generations before you when they wronged, and their messengers had come to them with clear proofs, but they were not to believe. Thus do We recompense the criminal people

Then We made you successors in the land after them so that We may observe how you will do.