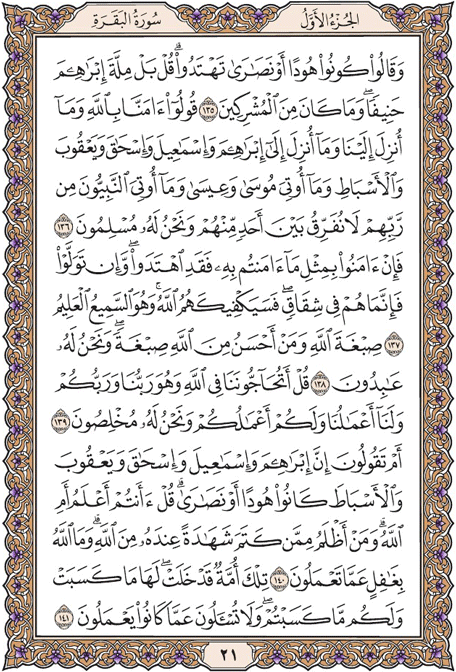 They say, |Be Jews or Christians [so] you will be guided.| Say, |Rather, [we follow] the religion of Abraham, inclining toward truth, and he was not of the polytheists.

So if they believe in the same as you believe in, then they have been [rightly] guided; but if they turn away, they are only in dissension, and Allah will be sufficient for you against them. And He is the Hearing, the Knowing.

[And say, |Ours is] the religion of Allah . And who is better than Allah in [ordaining] religion? And we are worshippers of Him.

Say, [O Muúammad], |Do you argue with us about Allah while He is our Lord and your Lord? For us are our deeds, and for you are your deeds. And we are sincere [in deed and intention] to Him.

Or do you say that Abraham and Ishmael and Isaac and Jacob and the Descendants were Jews or Christians? Say, |Are you more knowing or is Allah ?| And who is more unjust than one who conceals a testimony he has from Allah ? And Allah is not unaware of what you do.

That is a nation which has passed on. It will have [the consequence of] what it earned, and you will have what you have earned. And you will not be asked about what they used to do.