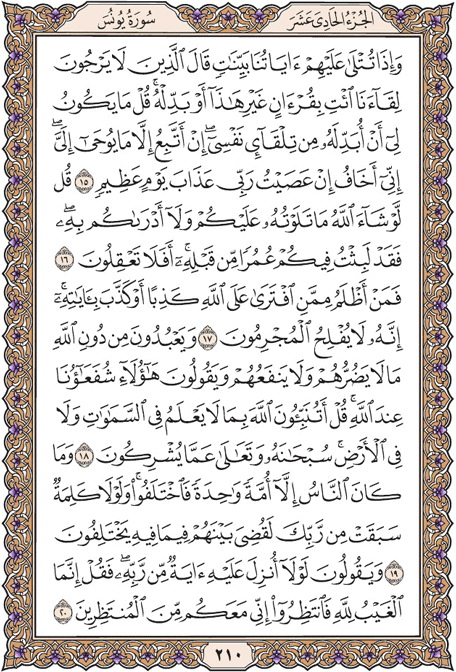 And when Our verses are recited to them as clear evidences, those who do not expect the meeting with Us say, |Bring us a Qur'an other than this or change it.| Say, [O Muúammad], |It is not for me to change it on my own accord. I only follow what is revealed to me. Indeed I fear, if I should disobey my Lord, the punishment of a tremendous Day.

Say, |If Allah had willed, I would not have recited it to you, nor would He have made it known to you, for I had remained among you a lifetime before it. Then will you not reason?|

So who is more unjust than he who invents a lie about Allah or denies His signs? Indeed, the criminals will not succeed

And they worship other than Allah that which neither harms them nor benefits them, and they say, |These are our intercessors with Allah | Say, |Do you inform Allah of something He does not know in the heavens or on the earth?| Exalted is He and high above what they associate with Him

And mankind was not but one community [united in religion], but [then] they differed. And if not for a word that preceded from your Lord, it would have been judged between them [immediately] concerning that over which they differ.

And they say, |Why is a sign not sent down to him from his Lord?| So say, |The unseen is only for Allah [to administer], so wait; indeed, I am with you among those who wait.