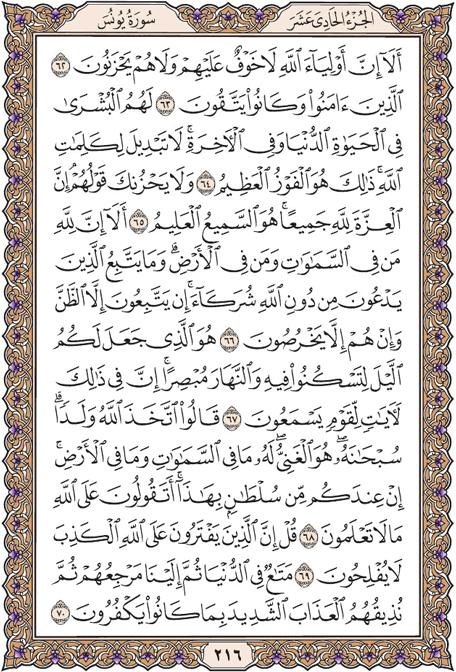 Unquestionably, [for] the allies of Allah there will be no fear concerning them, nor will they grieve

Those who believed and were fearing Allah

For them are good tidings in the worldly life and in the Hereafter. No change is there in the words of Allah . That is what is the great attainment.

And let not their speech grieve you. Indeed, honor [due to power] belongs to Allah entirely. He is the Hearing, the Knowing.

Unquestionably, to Allah belongs whoever is in the heavens and whoever is on the earth. And those who invoke other than Allah do not [actually] follow [His] |partners.| They follow not except assumption, and they are not but falsifying

It is He who made for you the night to rest therein and the day, giving sight. Indeed in that are signs for a people who listen.

They have said, | Allah has taken a son.| Exalted is He; He is the [one] Free of need. To Him belongs whatever is in the heavens and whatever is in the earth. You have no authority for this [claim]. Do you say about Allah that which you do not know?

Say, |Indeed, those who invent falsehood about Allah will not succeed.

[For them is brief] enjoyment in this world; then to Us is their return; then We will make them taste the severe punishment because they used to disbelieve