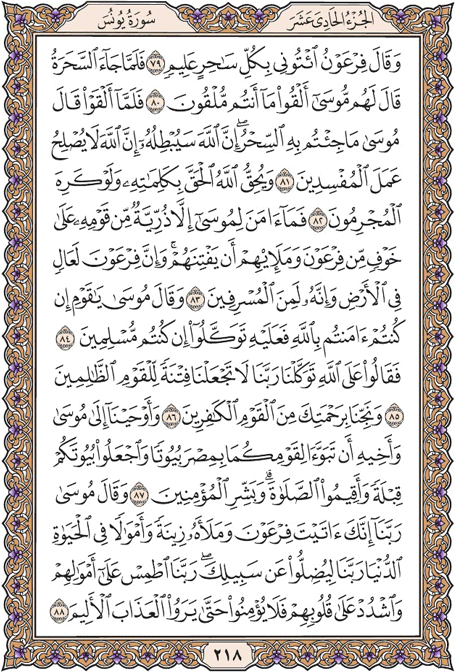 And Pharaoh said, |Bring to me every learned magician.

So when the magicians came, Moses said to them, |Throw down whatever you will throw.

And when they had thrown, Moses said, |What you have brought is [only] magic. Indeed, Allah will expose its worthlessness. Indeed, Allah does not amend the work of corrupters.

And Allah will establish the truth by His words, even if the criminals dislike it.

But no one believed Moses, except [some] youths among his people, for fear of Pharaoh and his establishment that they would persecute them. And indeed, Pharaoh was haughty within the land, and indeed, he was of the transgressors

And Moses said, |O my people, if you have believed in Allah , then rely upon Him, if you should be Muslims.

So they said, |Upon Allah do we rely. Our Lord, make us not [objects of] trial for the wrongdoing people

And save us by Your mercy from the disbelieving people.

And We inspired to Moses and his brother, |Settle your people in Egypt in houses and make your houses [facing the] qiblah and establish prayer and give good tidings to the believers.

And Moses said, |Our Lord, indeed You have given Pharaoh and his establishment splendor and wealth in the worldly life, our Lord, that they may lead [men] astray from Your way. Our Lord, obliterate their wealth and harden their hearts so that they will not believe until they see the painful punishment.