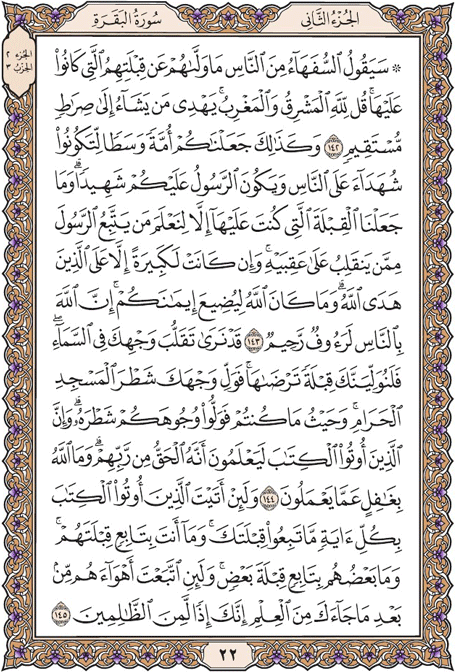 The foolish among the people will say, |What has turned them away from their qiblah, which they used to face?| Say, |To Allah belongs the east and the west. He guides whom He wills to a straight path.

And thus we have made you a just community that you will be witnesses over the people and the Messenger will be a witness over you. And We did not make the qiblah which you used to face except that We might make evident who would follow the Messenger from who would turn back on his heels. And indeed, it is difficult except for those whom Allah has guided. And never would Allah have caused you to lose your faith. Indeed Allah is, to the people, Kind and Merciful.

We have certainly seen the turning of your face, [O Muúammad], toward the heaven, and We will surely turn you to a qiblah with which you will be pleased. So turn your face toward al-Masjid al-îaram. And wherever you [believers] are, turn your faces toward it [in prayer]. Indeed, those who have been given the Scripture well know that it is the truth from their Lord. And Allah is not unaware of what they do.

And if you brought to those who were given the Scripture every sign, they would not follow your qiblah. Nor will you be a follower of their qiblah. Nor would they be followers of one another's qiblah. So if you were to follow their desires after what has come to you of knowledge, indeed, you would then be among the wrongdoers.