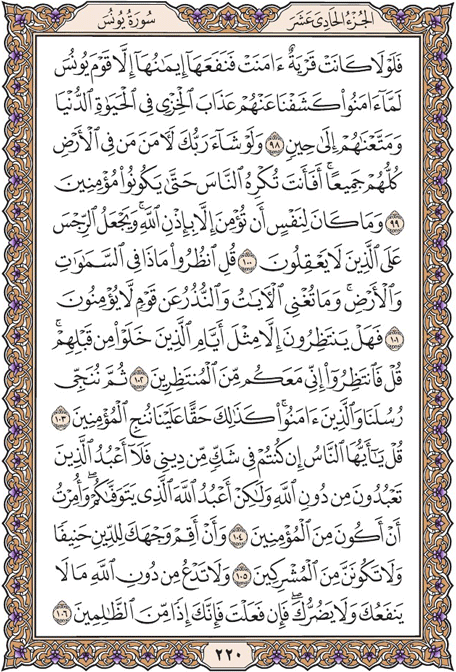 Then has there not been a [single] city that believed so its faith benefited it except the people of Jonah? When they believed, We removed from them the punishment of disgrace in worldly life and gave them enjoyment for a time.

And had your Lord willed, those on earth would have believed - all of them entirely. Then, [O Muúammad], would you compel the people in order that they become believers?

And it is not for a soul to believe except by permission of Allah , and He will place defilement upon those who will not use reason.

Say, |Observe what is in the heavens and earth.| But of no avail will be signs or warners to a people who do not believe

So do they wait except for like [what occurred in] the days of those who passed on before them? Say, |Then wait; indeed, I am with you among those who wait.

Then We will save our messengers and those who have believed. Thus, it is an obligation upon Us that We save the believers

Say, [O Muúammad], |O people, if you are in doubt as to my religion - then I do not worship those which you worship besides Allah ; but I worship Allah , who causes your death. And I have been commanded to be of the believers

And [commanded], 'Direct your face toward the religion, inclining to truth, and never be of those who associate others with Allah ;

And do not invoke besides Allah that which neither benefits you nor harms you, for if you did, then indeed you would be of the wrongdoers.'|