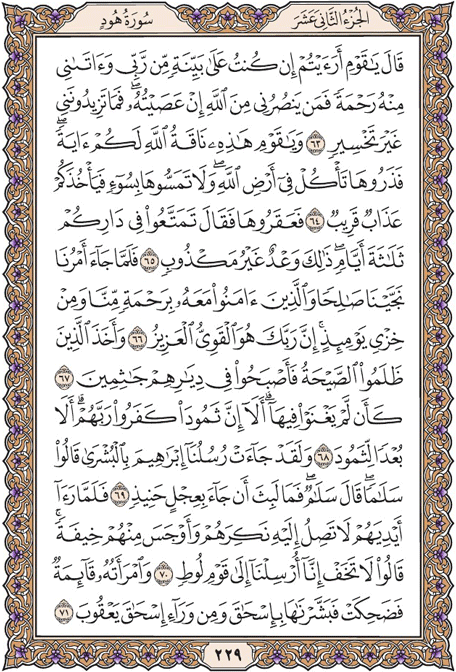 He said, |O my people, have you considered: if I should be upon clear evidence from my Lord and He has given me mercy from Himself, who would protect me from Allah if I disobeyed Him? So you would not increase me except in loss.

And O my people, this is the she-camel of Allah - [she is] to you a sign. So let her feed upon Allah 's earth and do not touch her with harm, or you will be taken by an impending punishment.

But they hamstrung her, so he said, |Enjoy yourselves in your homes for three days. That is a promise not to be denied.

So when Our command came, We saved êaliú and those who believed with him, by mercy from Us, and [saved them] from the disgrace of that day. Indeed, it is your Lord who is the Powerful, the Exalted in Might.

And the shriek seized those who had wronged, and they became within their homes [corpses] fallen prone

As if they had never prospered therein. Unquestionably, Thamud denied their Lord; then, away with Thamud.

And certainly did Our messengers come to Abraham with good tidings; they said, |Peace.| He said, |Peace,| and did not delay in bringing [them] a roasted calf.

But when he saw their hands not reaching for it, he distrusted them and felt from them apprehension. They said, |Fear not. We have been sent to the people of Lot.

And his Wife was standing, and she smiled. Then We gave her good tidings of Isaac and after Isaac, Jacob.