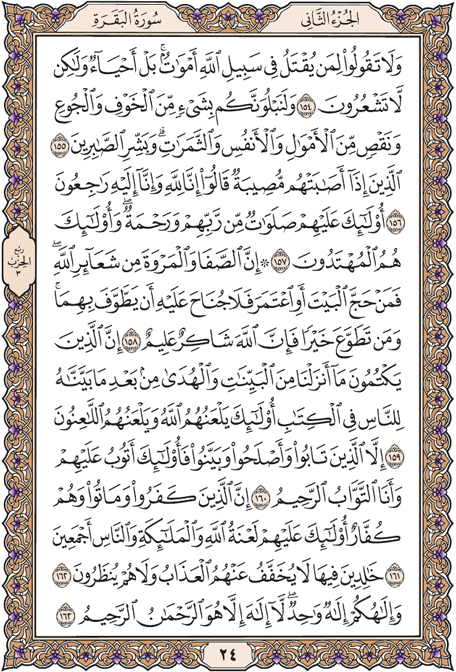 And do not say about those who are killed in the way of Allah , |They are dead.| Rather, they are alive, but you perceive [it] not.

And We will surely test you with something of fear and hunger and a loss of wealth and lives and fruits, but give good tidings to the patient,

Who, when disaster strikes them, say, |Indeed we belong to Allah , and indeed to Him we will return.

Those are the ones upon whom are blessings from their Lord and mercy. And it is those who are the [rightly] guided.

Indeed, a§-êafa and al-Marwah are among the symbols of Allah . So whoever makes úajj to the House or performs 'umrah - there is no blame upon him for walking between them. And whoever volunteers good - then indeed, Allah is appreciative and Knowing.

Indeed, those who conceal what We sent down of clear proofs and guidance after We made it clear for the people in the Scripture - those are cursed by Allah and cursed by those who curse,

Except for those who repent and correct themselves and make evident [what they concealed]. Those - I will accept their repentance, and I am the Accepting of repentance, the Merciful.

Indeed, those who disbelieve and die while they are disbelievers - upon them will be the curse of Allah and of the angels and the people, all together,

And your god is one God. There is no deity [worthy of worship] except Him, the Entirely Merciful, the Especially Merciful.