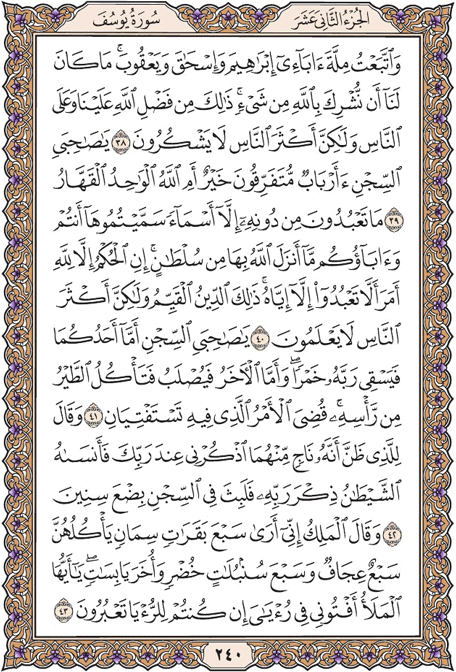 And I have followed the religion of my fathers, Abraham, Isaac and Jacob. And it was not for us to associate anything with Allah . That is from the favor of Allah upon us and upon the people, but most of the people are not grateful.

O [my] two companions of prison, are separate lords better or Allah , the One, the Prevailing?

You worship not besides Him except [mere] names you have named them, you and your fathers, for which Allah has sent down no authority. Legislation is not but for Allah . He has commanded that you worship not except Him. That is the correct religion, but most of the people do not know.

O two companions of prison, as for one of you, he will give drink to his master of wine; but as for the other, he will be crucified, and the birds will eat from his head. The matter has been decreed about which you both inquire.

And he said to the one whom he knew would go free, |Mention me before your master.| But Satan made him forget the mention [to] his master, and Joseph remained in prison several years.

And [subsequently] the king said, |Indeed, I have seen [in a dream] seven fat cows being eaten by seven [that were] lean, and seven green spikes [of grain] and others [that were] dry. O eminent ones, explain to me my vision, if you should interpret visions.