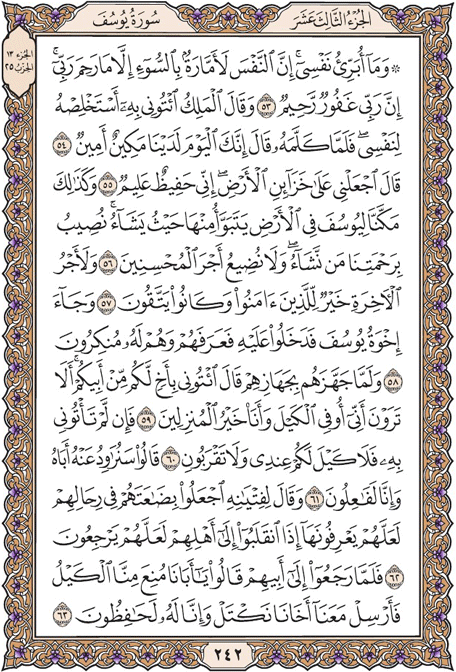 And I do not acquit myself. Indeed, the soul is a persistent enjoiner of evil, except those upon which my Lord has mercy. Indeed, my Lord is Forgiving and Merciful.

And the king said, |Bring him to me; I will appoint him exclusively for myself.| And when he spoke to him, he said, |Indeed, you are today established [in position] and trusted.

[Joseph] said, |Appoint me over the storehouses of the land. Indeed, I will be a knowing guardian.

And thus We established Joseph in the land to settle therein wherever he willed. We touch with Our mercy whom We will, and We do not allow to be lost the reward of those who do good.

And the reward of the Hereafter is better for those who believed and were fearing Allah .

And the brothers of Joseph came [seeking food], and they entered upon him; and he recognized them, but he was to them unknown.

And when he had furnished them with their supplies, he said, |Bring me a brother of yours from your father. Do not you see that I give full measure and that I am the best of accommodators?

But if you do not bring him to me, no measure will there be [hereafter] for you from me, nor will you approach me.

They said, |We will attempt to dissuade his father from [keeping] him, and indeed, we will do [it].

And [Joseph] said to his servants, |Put their merchandise into their saddlebags so they might recognize it when they have gone back to their people that perhaps they will [again] return.

So when they returned to their father, they said, |O our father, [further] measure has been denied to us, so send with us our brother [that] we will be given measure. And indeed, we will be his guardians.