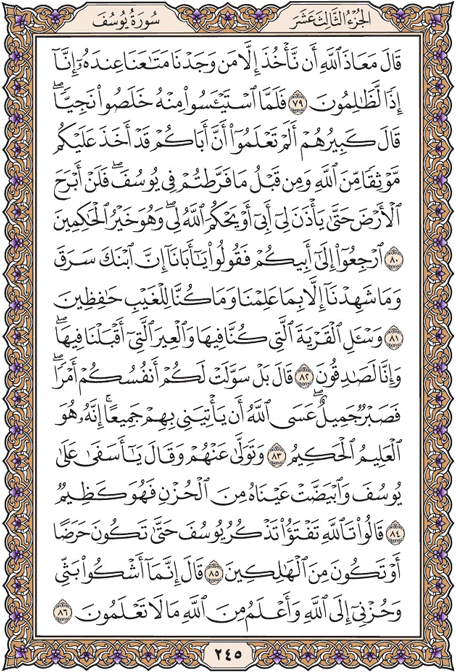 He said, |[I seek] the refuge of Allah [to prevent] that we take except him with whom we found our possession. Indeed, we would then be unjust.

So when they had despaired of him, they secluded themselves in private consultation. The eldest of them said, |Do you not know that your father has taken upon you an oath by Allah and [that] before you failed in [your duty to] Joseph? So I will never leave [this] land until my father permits me or Allah decides for me, and He is the best of judges.

Return to your father and say, |O our father, indeed your son has stolen, and we did not testify except to what we knew. And we were not witnesses of the unseen,

And ask the city in which we were and the caravan in which we came - and indeed, we are truthful,|

[Jacob] said, |Rather, your souls have enticed you to something, so patience is most fitting. Perhaps Allah will bring them to me all together. Indeed it is He who is the Knowing, the Wise.

And he turned away from them and said, |Oh, my sorrow over Joseph,| and his eyes became white from grief, for he was [of that] a suppressor.

They said, |By Allah , you will not cease remembering Joseph until you become fatally ill or become of those who perish.

He said, |I only complain of my suffering and my grief to Allah , and I know from Allah that which you do not know.