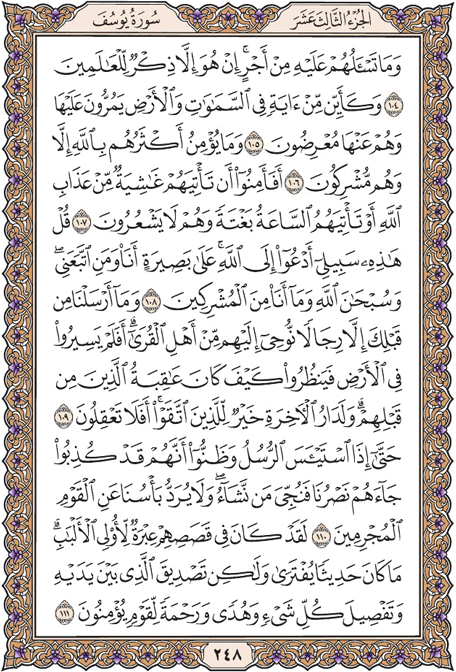 And you do not ask of them for it any payment. It is not except a reminder to the worlds.

And how many a sign within the heavens and earth do they pass over while they, therefrom, are turning away.

And most of them believe not in Allah except while they associate others with Him.

Then do they feel secure that there will not come to them an overwhelming [aspect] of the punishment of Allah or that the Hour will not come upon them suddenly while they do not perceive?

Say, |This is my way; I invite to Allah with insight, I and those who follow me. And exalted is Allah ; and I am not of those who associate others with Him.

And We sent not before you [as messengers] except men to whom We revealed from among the people of cities. So have they not traveled through the earth and observed how was the end of those before them? And the home of the Hereafter is best for those who fear Allah ; then will you not reason?

[They continued] until, when the messengers despaired and were certain that they had been denied, there came to them Our victory, and whoever We willed was saved. And Our punishment cannot be repelled from the people who are criminals.

There was certainly in their stories a lesson for those of understanding. Never was the Qur'an a narration invented, but a confirmation of what was before it and a detailed explanation of all things and guidance and mercy for a people who believe.