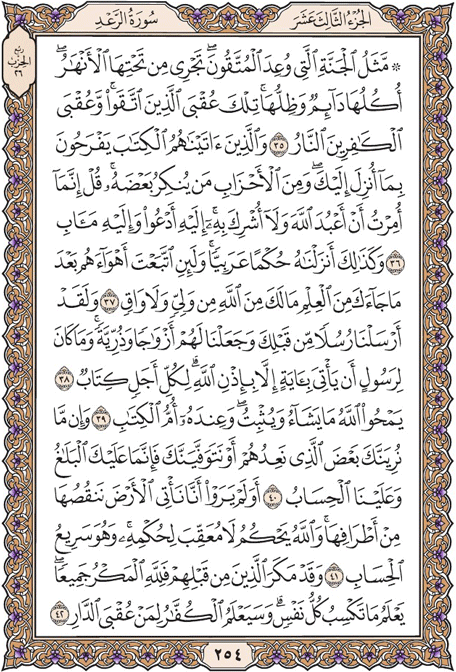 And [the believers among] those to whom We have given the [previous] Scripture rejoice at what has been revealed to you, [O Muúammad], but among the [opposing] factions are those who deny part of it. Say, |I have only been commanded to worship Allah and not associate [anything] with Him. To Him I invite, and to Him is my return.

And thus We have revealed it as an Arabic legislation. And if you should follow their inclinations after what has come to you of knowledge, you would not have against Allah any ally or any protector.

And We have already sent messengers before you and assigned to them wives and descendants. And it was not for a messenger to come with a sign except by permission of Allah . For every term is a decree.

Allah eliminates what He wills or confirms, and with Him is the Mother of the Book.

And whether We show you part of what We promise them or take you in death, upon you is only the [duty of] notification, and upon Us is the account.

Have they not seen that We set upon the land, reducing it from its borders? And Allah decides; there is no adjuster of His decision. And He is swift in account.

And those before them had plotted, but to Allah belongs the plan entirely. He knows what every soul earns, and the disbelievers will know for whom is the final home.