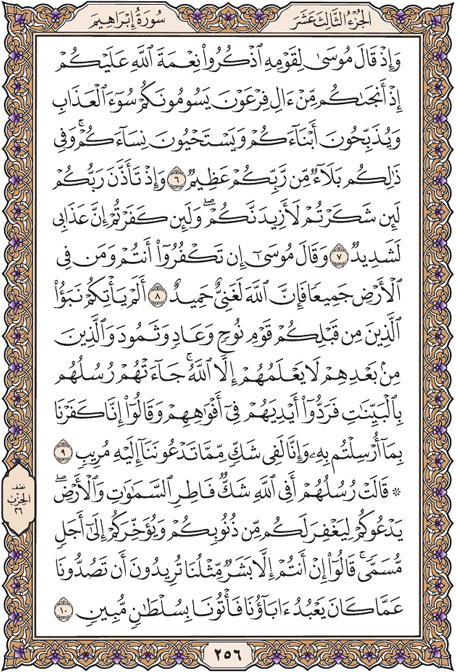 And [recall, O Children of Israel], when Moses said to His people, |Remember the favor of Allah upon you when He saved you from the people of Pharaoh, who were afflicting you with the worst torment and were slaughtering your [newborn] sons and keeping your females alive. And in that was a great trial from your Lord.

And [remember] when your Lord proclaimed, 'If you are grateful, I will surely increase you [in favor]; but if you deny, indeed, My punishment is severe.' |

And Moses said, |If you should disbelieve, you and whoever is on the earth entirely - indeed, Allah is Free of need and Praiseworthy.

Has there not reached you the news of those before you - the people of Noah and 'Aad and Thamud and those after them? No one knows them but Allah . Their messengers brought them clear proofs, but they returned their hands to their mouths and said, |Indeed, we disbelieve in that with which you have been sent, and indeed we are, about that to which you invite us, in disquieting doubt.

Their messengers said, |Can there be doubt about Allah , Creator of the heavens and earth? He invites you that He may forgive you of your sins, and He delays your death for a specified term.| They said, |You are not but men like us who wish to avert us from what our fathers were worshipping. So bring us a clear authority.