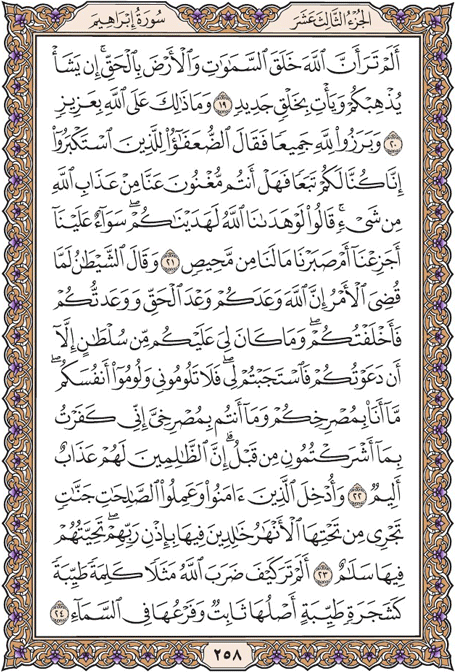 Have you not seen that Allah created the heavens and the earth in truth? If He wills, He can do away with you and produce a new creation.

And that is not difficult for Allah .

And they will come out [for judgement] before Allah all together, and the weak will say to those who were arrogant, |Indeed, we were your followers, so can you avail us anything against the punishment of Allah ?| They will say, |If Allah had guided us, we would have guided you. It is all the same for us whether we show intolerance or are patient: there is for us no place of escape.

And Satan will say when the matter has been concluded, |Indeed, Allah had promised you the promise of truth. And I promised you, but I betrayed you. But I had no authority over you except that I invited you, and you responded to me. So do not blame me; but blame yourselves. I cannot be called to your aid, nor can you be called to my aid. Indeed, I deny your association of me [with Allah ] before. Indeed, for the wrongdoers is a painful punishment.

And those who believed and did righteous deeds will be admitted to gardens beneath which rivers flow, abiding eternally therein by permission of their Lord; and their greeting therein will be, |Peace!|

Have you not considered how Allah presents an example, [making] a good word like a good tree, whose root is firmly fixed and its branches [high] in the sky?