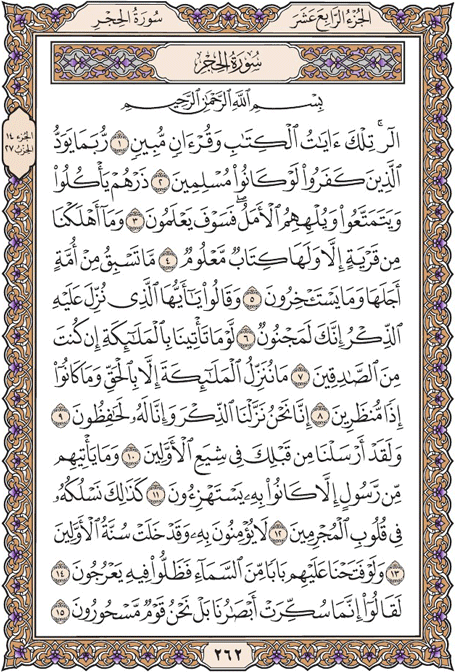 Alif, Lam, Ra. These are the verses of the Book and a clear Qur'an.

Perhaps those who disbelieve will wish that they had been Muslims.

Let them eat and enjoy themselves and be diverted by [false] hope, for they are going to know.

And We did not destroy any city but that for it was a known decree.

No nation will precede its term, nor will they remain thereafter.

And they say,|O you upon whom the message has been sent down, indeed you are mad.

Why do you not bring us the angels, if you should be among the truthful?|

We do not send down the angels except with truth; and the disbelievers would not then be reprieved.

Indeed, it is We who sent down the Qur'an and indeed, We will be its guardian.

And We had certainly sent [messengers] before you, [O Muúammad], among the sects of the former peoples.

And no messenger would come to them except that they ridiculed him.

Thus do We insert denial into the hearts of the criminals.

They will not believe in it, while there has already occurred the precedent of the former peoples.

And [even] if We opened to them a gate from the heaven and they continued therein to ascend,

They would say, |Our eyes have only been dazzled. Rather, we are a people affected by magic.