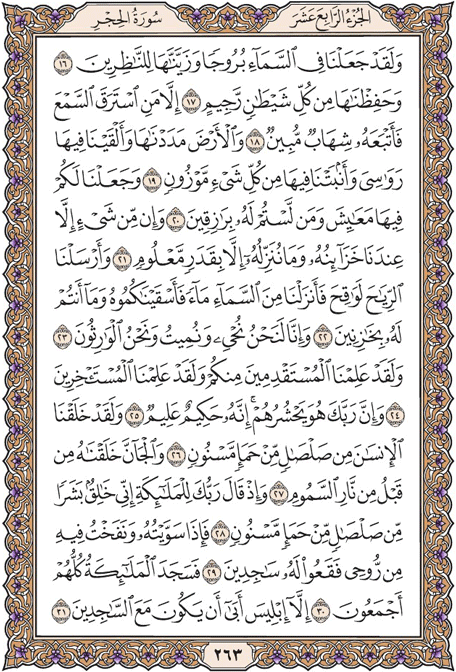 And We have placed within the heaven great stars and have beautified it for the observers.

Except one who steals a hearing and is pursued by a clear burning flame.

And the earth - We have spread it and cast therein firmly set mountains and caused to grow therein [something] of every well-balanced thing.

And We have made for you therein means of living and [for] those for whom you are not providers.

And there is not a thing but that with Us are its depositories, and We do not send it down except according to a known measure.

And We have sent the fertilizing winds and sent down water from the sky and given you drink from it. And you are not its retainers.

And indeed, it is We who give life and cause death, and We are the Inheritor.

And indeed, your Lord will gather them; indeed, He is Wise and Knowing.

And We did certainly create man out of clay from an altered black mud.

And the jinn We created before from scorching fire.

And [mention, O Muúammad], when your Lord said to the angels, |I will create a human being out of clay from an altered black mud.

And when I have proportioned him and breathed into him of My [created] soul, then fall down to him in prostration.

So the angels prostrated - all of them entirely,

Except Iblees, he refused to be with those who prostrated.