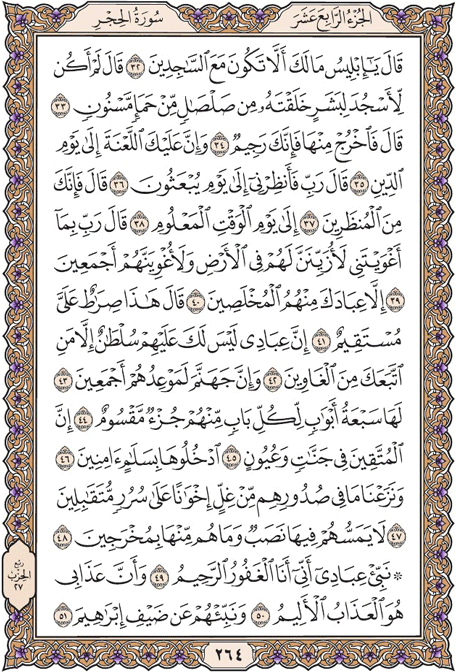 [ Allah ] said, O Iblees, what is [the matter] with you that you are not with those who prostrate?|

He said, |Never would I prostrate to a human whom You created out of clay from an altered black mud.

And indeed, upon you is the curse until the Day of Recompense.

He said,|My Lord, then reprieve me until the Day they are resurrected.

[ Allah ] said, |So indeed, you are of those reprieved

Until the Day of the time well-known.

[Iblees] said, |My Lord, because You have put me in error, I will surely make [disobedience] attractive to them on earth, and I will mislead them all

Except, among them, Your chosen servants.

Indeed, My servants - no authority will you have over them, except those who follow you of the deviators.

And indeed, Hell is the promised place for them all.

It has seven gates; for every gate is of them a portion designated.

Indeed, the righteous will be within gardens and springs.

[Having been told], |Enter it in peace, safe [and secure].

And We will remove whatever is in their breasts of resentment, [so they will be] brothers, on thrones facing each other.

No fatigue will touch them therein, nor from it will they [ever] be removed.

[O Muúammad], inform My servants that it is I who am the Forgiving, the Merciful.

And that it is My punishment which is the painful punishment.

And inform them about the guests of Abraham,