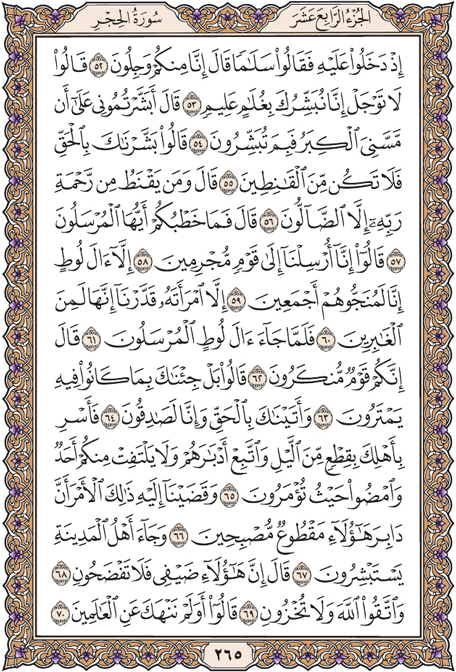 When they entered upon him and said, |Peace.| [Abraham] said, |Indeed, we are fearful of you.

[The angels] said, |Fear not. Indeed, we give you good tidings of a learned boy.

He said, |Have you given me good tidings although old age has come upon me? Then of what [wonder] do you inform?|

They said, |We have given you good tidings in truth, so do not be of the despairing.

He said, |And who despairs of the mercy of his Lord except for those astray?|

[Abraham] said, |Then what is your business [here], O messengers?|

They said, |Indeed, we have been sent to a people of criminals,

Except the family of Lot; indeed, we will save them all

Except his wife.| Allah decreed that she is of those who remain behind.

And when the messengers came to the family of Lot,

He said, |Indeed, you are people unknown.

They said, |But we have come to you with that about which they were disputing,

And we have come to you with truth, and indeed, we are truthful.

So set out with your family during a portion of the night and follow behind them and let not anyone among you look back and continue on to where you are commanded.

And We conveyed to him [the decree] of that matter: that those [sinners] would be eliminated by early morning.

And the people of the city came rejoicing.

[Lot] said, |Indeed, these are my guests, so do not shame me.

And fear Allah and do not disgrace me.

They said, |Have we not forbidden you from [protecting] people?|