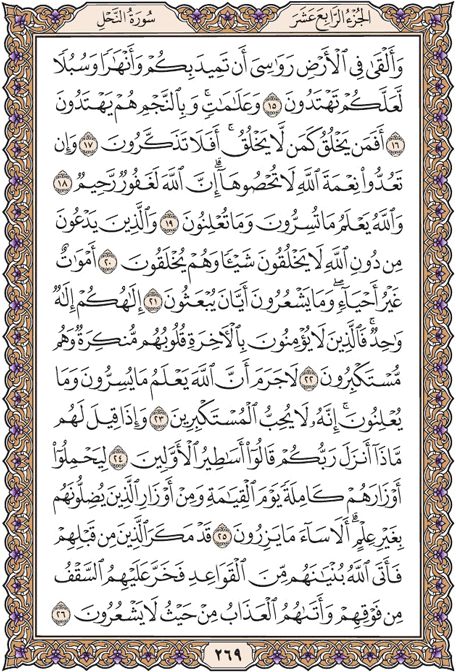 And He has cast into the earth firmly set mountains, lest it shift with you, and [made] rivers and roads, that you may be guided,

And landmarks. And by the stars they are [also] guided.

Then is He who creates like one who does not create? So will you not be reminded?

And if you should count the favors of Allah , you could not enumerate them. Indeed, Allah is Forgiving and Merciful.

And Allah knows what you conceal and what you declare.

And those they invoke other than Allah create nothing, and they [themselves] are created.

They are, [in fact], dead, not alive, and they do not perceive when they will be resurrected.

Your god is one God. But those who do not believe in the Hereafter - their hearts are disapproving, and they are arrogant.

Assuredly, Allah knows what they conceal and what they declare. Indeed, He does not like the arrogant.

And when it is said to them, |What has your Lord sent down?| They say, |Legends of the former peoples,|

That they may bear their own burdens in full on the Day of Resurrection and some of the burdens of those whom they misguide without knowledge. Unquestionably, evil is that which they bear.

Those before them had already plotted, but Allah came at their building from the foundations, so the roof fell upon them from above them, and the punishment came to them from where they did not perceive.