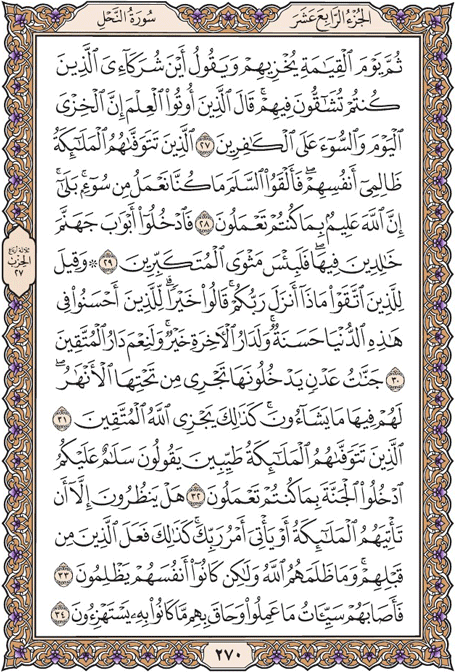 Then on the Day of Resurrection He will disgrace them and say, |Where are My 'partners' for whom you used to oppose [the believers]?| Those who were given knowledge will say, |Indeed disgrace, this Day, and evil are upon the disbelievers| -

The ones whom the angels take in death [while] wronging themselves, and [who] then offer submission, [saying], |We were not doing any evil.| But, yes! Indeed, Allah is Knowing of what you used to do.

So enter the gates of Hell to abide eternally therein, and how wretched is the residence of the arrogant.

And it will be said to those who feared Allah , |What did your Lord send down?| They will say, |[That which is] good.| For those who do good in this world is good; and the home of the Hereafter is better. And how excellent is the home of the righteous -

Gardens of perpetual residence, which they will enter, beneath which rivers flow. They will have therein whatever they wish. Thus does Allah reward the righteous -

The ones whom the angels take in death, [being] good and pure; [the angels] will say, |Peace be upon you. Enter Paradise for what you used to do.

Do the disbelievers await [anything] except that the angels should come to them or there comes the command of your Lord? Thus did those do before them. And Allah wronged them not, but they had been wronging themselves.

So they were struck by the evil consequences of what they did and were enveloped by what they used to ridicule.