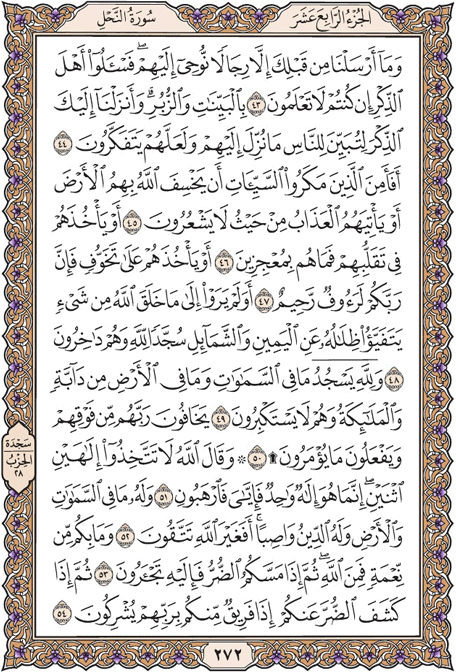 And We sent not before you except men to whom We revealed [Our message]. So ask the people of the message if you do not know.

[We sent them] with clear proofs and written ordinances. And We revealed to you the message that you may make clear to the people what was sent down to them and that they might give thought.

Then, do those who have planned evil deeds feel secure that Allah will not cause the earth to swallow them or that the punishment will not come upon them from where they do not perceive?

Or that He would not seize them during their [usual] activity, and they could not cause failure?

Or that He would not seize them gradually [in a state of dread]? But indeed, your Lord is Kind and Merciful.

Have they not considered what things Allah has created? Their shadows incline to the right and to the left, prostrating to Allah , while they are humble.

And to Allah prostrates whatever is in the heavens and whatever is on the earth of creatures, and the angels [as well], and they are not arrogant.

They fear their Lord above them, and they do what they are commanded.

And Allah has said, |Do not take for yourselves two deities. He is but one God, so fear only Me.

And to Him belongs whatever is in the heavens and the earth, and to Him is [due] worship constantly. Then is it other than Allah that you fear?

And whatever you have of favor - it is from Allah . Then when adversity touches you, to Him you cry for help.

Then when He removes the adversity from you, at once a party of you associates others with their Lord